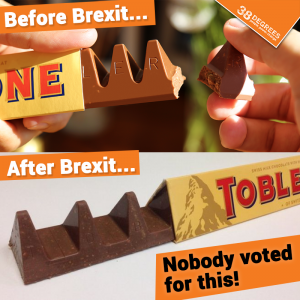 A decision to space out the distinctive triangular chocolate chunks in two Toblerone bars sold in the UK has upset fans who say that they do mind the gap.

The product’s makers, US-based Mondelez International, said it had changed the design to reduce the weight of what were 400g and 170g bars.

Some consumers have described the move as “the wrong decision” and said the bigger spaces looked “stupid”.

Mondelez said the move was down to a rise in the cost of ingredients.

The move has resulted in the weight of the 400g bars being reduced to 360g and the 170g bars to 150g, while the size of the packaging has remained the same.

It said: “We chose to change the shape to keep the product affordable for our customers.”

But consumers took to Toblerone’s Facebook page to question why the company had decided to make the gaps between the triangles bigger, rather than reducing the length of the bars.

Lee Yarker said: “Fair enough reducing the weight of the bar, but why the big gap in between segments? Looks stupid imo [in my opinion], could have just made the bar shorter and kept the original design.”

A spokeswoman for Mondelez acknowledged that the foreign exchange rate was currently “not favourable”, but added: “This change wasn’t done as a result of Brexit.”

However, she was unable to clarify whether the change in shape affected only bars sold in the UK and not the rest of Europe.